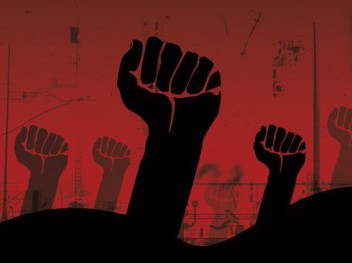 Whether or not Charly Boy was born
with a placard in his hand, I know not,
But his words: “Our mumu don do”
must not be left to burn
in the fireplace of sentiments
Because medicine for many of the
ailments that plague our society,
is common sense.

We’ll remain unripe, and much too so,
to place a ban on imports until we
have imported ‘sense’ because
our educational system is a failed
attempt at producing, packing
and selling ‘sense’

Hear and heed my humble advice,
we might need to improvise
But don’t drown my words in a sea of laughter.
Let us take to trade by barter:
ten barrels of crude oil for ten barrels of ‘sense’
We desperately need to rid this political nonsense
That further dents our flag with stains.

It was in those days when the teeth of recession
bit so hard on us that many ran into the open
arms of MMM and some depended largely on the
meals served in dreams by their village people
Yes, it was then that I cuddled my headset long enough
to read Tekno’s “Ro ra o” An open letter wrapped in
an envelope of beats and addressed to the only
Nigerian man whose one butt sits in three different offices:
light, darkness and the nameless ‘something’ in between.

Tekno talked about the small things,
should we then leave the major things, unsaid?
Like the Christmas tree blossoming beside
Mazi Okorocha’s obi. I hear that civil servants
can pluck their salaries from it and buy for
themselves subsidized laughter from the
newly birthed Ministry of Happiness.
Owerri, the smile on the sweaty face of Imo State
has reverted into a museum of sculptured hopes-
too static to move!

We can’t but talk about the made-in-Aba version
of Nelson Mandela. Like other Aba-mades,
we can neither doubt nor question his durability.
Blinded by ethnicity, Umuahia is his guide stick
His fight for secession must have stemmed
from his inability to see that we are intertwined
And the same JIDE which starts JIDEnna, ends OlaJIDE.
But like a girl whose artificial hips slips out of place
when she walks pass the guy she is crushing on;
he grew wings, flew away to perch on Trump’s nose
whilst guns plagued with tuberculosis
coughed bullets in Abia,

There are many creases on the forehead
of the savannah of my youth.
The broom in Benue has swept
her youths into a wheelbarrow of
ridiculous empowerment; enjoying the
hallelujah chorus from our hungry stomachs
as we are wheeled to farmlands where nomads
milk dry our udders of peace and water our
crops with our own blood and tears.

Just how did this congress of goats, so win our votes
of confidence that we made them watchmen
over our barn; where they speak in whispers,
the language of envelopes and ‘Ghana-must-gos’
How did they make us believe that milo, when
Poured into a sachet of peak whitens it milk?
How did the demons in PDP become angels in APC?

But for the white iyan in Ekiti who must have
cleverly concealed his black emo by eating pomo
with us, from the same plate at Iya Basira’s canteen,
our silence would have long lost its golden lustre and
become a rusty sword in the hand of gutsy betrayers.

I know that one day my tongue will grow spikes
like Edmund Obilo’s and I will speak about
the ghost workers on our payment vouchers
and make the president, his vice and their vices
explain how the idleness of unemployed
folks became payroll-worthy.

Who will help us whisper into the ears on
either side of Aso Rock, that the corruption war
is not for such a regime that can be overthrown
by a coup planned by a group of tiny rodents!
For our kind of corruption is an uncommon strain
of a deadly virus, the cure is not with us.
Bureaucracy and the dark rays of remita
is all I see at the end of this tunnel of
the corruption fight.

While we must cheer Baba up, to crawl
to the finishing line of this race;
let us not be deceived by the rumors
about the arguments in the other room
between the bed and pillow.
Let us together, fell the old trees
before the political hawk stoops in 2019
to scoop votes in exchange for peanuts
Let us make him see that a re-run is
another wet dream; a movie to be seen
only by sleepy eyes, written and produced
by restless hormones in the ductless glands of selfishness
And we Nigerians, are too wild awake to watch such.

Let me make this very clear
I am not this poem, this poem is not me.
My friends have long advised that I sue
my pen for impersonation, perhaps I will do so
someday, after I have succeeded in making
Nigeria see that she is the green mucus hanging
in the nostrils of Africa and of course, the only
known giant, who perpetually lives like a helpless infant.