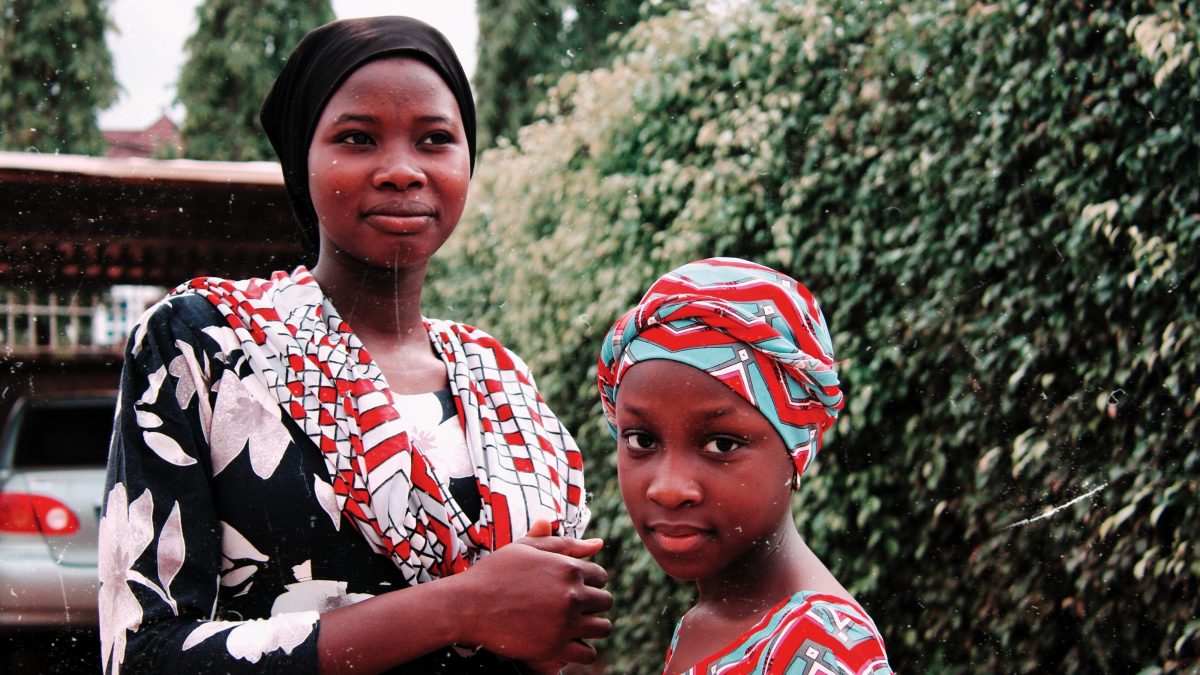 Mares in the night held her tight- as cares of the past stole sleep away from her eyes in the middle of that lonely night- until it was 6:30 am.

Suddenly, Hauwa heard the doorbell; “Ding dong“.
She arose from the bed quickly without hesitation, putting on her crazy catty cap, she rushed to the door of the first parlor downstairs, in that big mansion. The same her father- Mohammed- built in his days.

On reaching the door, she opened slowly and beheld a man. Tall, dark and fat. A little handsome too.

“Hello Sire”, she answered with a weak voice, like one beaten of ten men, as she took two steps closer while rubbing her left eye with her index finger to clear the blurry morning view.

“I’m Luther”. He introduced with a smiling and bright looking face.

Hauwa looked at him for few seconds with her lips pushed onward. Then she inquired curiously;
“From whence Luther?”.

“Your father’s bosom friend in the 90’s.” He said with a confident voice, then went on; “An inspector of the Nigerian Police. Sorry to intrude this early. I am here for an important course, my little lady”. This he said while he bended a semi-bow at his last words- when he said ‘my little lady’.

“Come hither Roger man. Come sit yonder. I’ll call you Roger man”. She said with a much clearer voice now, as she ushered him into the room properly.

“I know the case on ground”. Luther said on his way, as he takes a seat and then he continued;
“The accusation that Eric- your mother’s boyfriend is lying against you. He charged that you murdered your mother. And though we weren’t in the same page in the living days of your mother. I still felt I owe your late father this honor. To stand for you- his daughter- in this matter”.

After saying this, Hauwa- who was standing, also took a seat and faced him. She then fabricated a cracked smile that lasted for only 3 seconds, then vanished into a serious face.
Now, she was already in a somewhat calm condition. So she retorted;

“O’er and O’er again, see I- a miserable world.
Are not these all memes?
I pray thee, to harken.
Prithy, regard mine word, when quoth I, these
days-
all are repetitions of senseless scenes”.

“Halt your manners Sire!” Hauwa replied. “My English is not bad. It is badly hard. Hardly heard. I am a product of Shakespeare”. She said with obvious pride, while she glanced through his glasses, waiting for him to utter a reply.

Then he gave a deep sigh like one- weary of a long journey. And thus he said;

“Then perhaps you may want to simplify your story. I am here to help you”.

“Okay”. She answered. She cleared her voice like an ‘Ichie’ in the Nigerian movies as if she was ready to speak to the crowd, but she remained mute for a little while.

The officer- her father’s friend- then said to her with a calm voice; “You have my audience Hauwa”.

“Tip-Toe with me to a tragic travel, into the sad world of a lost diary- whose words were painted with the color of blood- by a little girl of a strange personality and worldview and philosophy. The same who had said; ‘Today is Yesterday, repeated with a different nonsense’.
It is I- Hauwa Mohammed. Thirteen years of birth age. I will simplify as much as I can Roger man”.

“Good-Good”, he said; “At least, I comprehend.
Please go on. What really happened?”

Tears rolled down her smooth cheeks as she began to sing;

“It was a lover and his lass,
With a hey, and a ho, and a hey nonino,
That o’er the green cornfield did pass
In the springtime, the only pretty ring time,
When birds do sing, hey ding a ding, ding;
Sweet lovers love the spring”.

“Hauwa, uhmm… Hauwa”, he interrupted.
“You sing well, but why singing at this time?” He asked with sincere curiosity.

Hauwa then smiled- as she cleaned her face to free her cheeks from the flow of tears.
Then she replied;

“That was the song. The same I was singing that day.
I learned it from Shakespeare’s ‘As You Like It’. It was my favorite.
I remember singing it with joy when suddenly I heard a scream from upstairs. It was my mother’s voice. I knew she was together with Eric. But I had no choice- than to rush up. Something I would never do on a normal day. But in my rush, I slipped and fell from the stairs.”

At this point, Luther had already removed his recorder. He recorded, as Hauwa continued;

“Thank goodness I was not injured. But before I could get back to my feet, uncle Eric came down the stairs with a quick match, passed me, and walked out. We weren’t in good terms with him though.
I stood up gently and …”

“Wait, Hauwa- ” Luther cuts in_ then he asked;
“Did you say you weren’t in good terms with Eric? …Why please?”

By this time, it was already 7:45 am. Both of them were already in the depth of the conversation.

So Hauwa responded;
“We were never in peace. I never liked him.
He always wanted to take the place of my father. And he is fond of reminding me that I am a woman. And that my wealth is in my husband’s house, not my father’s”.

After saying these words, Hauwa angrily hissed and laid her back against the chair on which she sat.

“Please go on”, he said; “what was usually the response of your mother whenever he says that?”

With a frowned face, Hauwa replied;

“That woman was even a mess. She only laughs and says nothing. I confess- that I hated her for that. She believed the books made me crazy. I never got her attention. She calls me Crazy Hauwa. That’s how I got addicted to books. I made Shakespeare my fantasy-father and friend. He was the only one who was close- through his novels and plays. And I grew older than my age.
But Roger man, what really do you seek to know?”

At this, Luther felt it was the right time to go straight to the point. The ‘Roger man’ as Hauwa would prefer to call him- for reasons known to none- is a straightforward man.
And so he replied calmly;

“At first, when I heard of this case, I was so sure you were innocent. But now that I’ve heard you speak, you beat my wildest imagination. You are indeed older than your age. Thus, I must ask you directly;
Hauwa, did you murder your mother?”

Hauwa, after this question, rose to her feet. Luther also stood up. Then, she said;

“I don’t know. After Eric walked out, I rushed up to my mother’s room. But no one was there. I only saw blood on the bed and a knife on the pillow. I concluded that Eric killed her and hid her.”

After these words, she kept quiet and stood in silence. Then Luther went closer aback, and placed his right hand on her left shoulder, while he said;

“I am still here Hauwa. Please open up.”

“Eric came back “, she continued; “I heard his voice calling my name from downstairs. I was so angry and I felt like killing him.
So I heard footsteps coming slowly towards the room. I quickly took hold of the knife and hid beside the door, waiting for Eric. Immediately at the entrance of the person, I launched a heavy stab. And for the first time, I killed someone”.

Luther was weakened by this. He threw himself back to the chair he was. And the room was mute for few minutes.

Afterward, he asked;
“Who did you kill?”

“My mother”, Hauwa answered. “But I did not murder my mother. I did not set out to kill her. The stab was for Eric. I am not guilty of Eric’s charge”.

“Neither are you innocent Hauwa.” He retorted.

In confusion, Hauwa asked;
“Am I guilty and innocent?”

Then Luther sighed and replied;
“Something like that. We will plead that it was a domestic accident. And that you are only a child of thirteen years. You cannot go to jail. You are guilty and innocent”.

Elisha Bala, otherwise known as EB is a poet, story-teller, and theologian who hails from middle belt Nigeria. He is the author of the popular narrative; THE RISE AND FALL OF JULIANA MENSAH among many others. And the author of poems like; A forest of ten demons and At night.

How to Enter Issue III of the 20.35 African Poetry Series