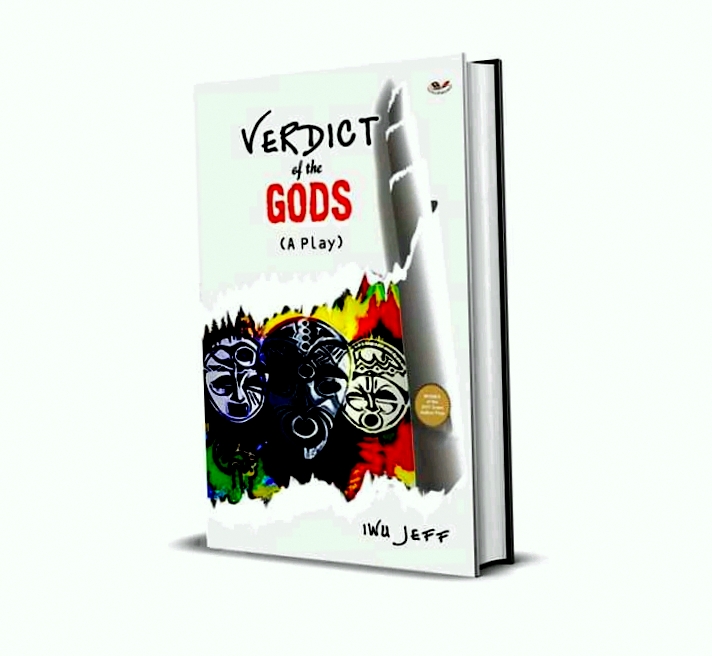 “The play Verdict of the Gods quarries into the world of traditional leadership responsibility for communal well-being and brings us into contact with yet another lesson that our world has refused to learn.”

“In Verdict of the Gods, the twisting exciting emotional events enter one with exhilarating new form, and this confirms Iwu Jeff as one of the most important and influential writers of our generation.”

“Iwu Jeff’s Verdict of the Gods is a spectacular play that reinforces the African belief in the gods’ phenomenon. It also emphasizes the fact that man must account for his deed at the death-post of his verdict. What an Oedipus exemplification.”

– Salamatu Sule Book Reviewer, Literary Critic and Author of Orchestra of Her Rite

“I find myself highly intrigued by the characters of the play, Verdict of the Gods. The sketches the playwright carefully brings to light are quite mesmerizing and intoxicating. The lore of the gods and various individuals are laced with an indigenous cultural heritage that charms my soul in the reading, as well as expands my own consciousness. One thing that stands out for me personally is the reverence that is embodied throughout the work. This includes that of the deities as well as the elders. This play offers a great and somewhat subtle message for us all in reference to our relationships.”

“The reassuring kinetics of African Literature is that vibrant young writers are fanning the embers of the muse. Here is one more promising voice with his play entitled, Verdict of the Gods. The story races home with the rich escort of appropriate proverbs and the reader is rewarded by the pleasant shock of a messianic climax where a king unusually pays the ultimate price by giving his life for the redemption of his people.”

“Jeff Iwu’s Verdict of the Gods, which draws extensively on the author’s rich Igbo heritage, is a parabolic commentary on our country in dire need of veritable change. Like Achara, Nigeria is plagued by a curse brought on it by the ferocious greed of its scheming, homicidal and ostentatious political leadership. In this touching tragic play, Iwu reveals that Nigeria’s problem is deeply rooted in its savage history of murder, plunder, marginalization, and exploitation of the weak. This season of change, Verdict of the Gods calls for a concerted effort to unravel the problem and address it holistically. The play’s ending with the suicide by hanging of Eze Obioha (lit. the heart/will of the people), is an uncommon display of courage and acceptance of responsibility for the mistakes of past leaders.”

“Verdict of the Gods is an epic tragic tale told in the voice of an ancient griot.”

“Iwu Jeff’s Verdict of the Gods is a microcosm of the Nigerian society. The gods are angry and the land is doomed. Who will be the sacrificial lamb? This masterpiece is rendered in a carefully selected diction, spiced with apt proverbs that fill one with the glamour of Africa and Africanness.”

“Verdict of the Gods is a revelation.”

“Iwu Jeff’s Verdict of the Gods is African home of proverbs.”

Are you an aspiring author who just landed a publishing deal? Or perhaps you are a self-publisher author looking for a strong review for your soon-to-be-published or already published book, fill out our contact form here, and fill in “Book Review” in the subject line. Our rates are fair!