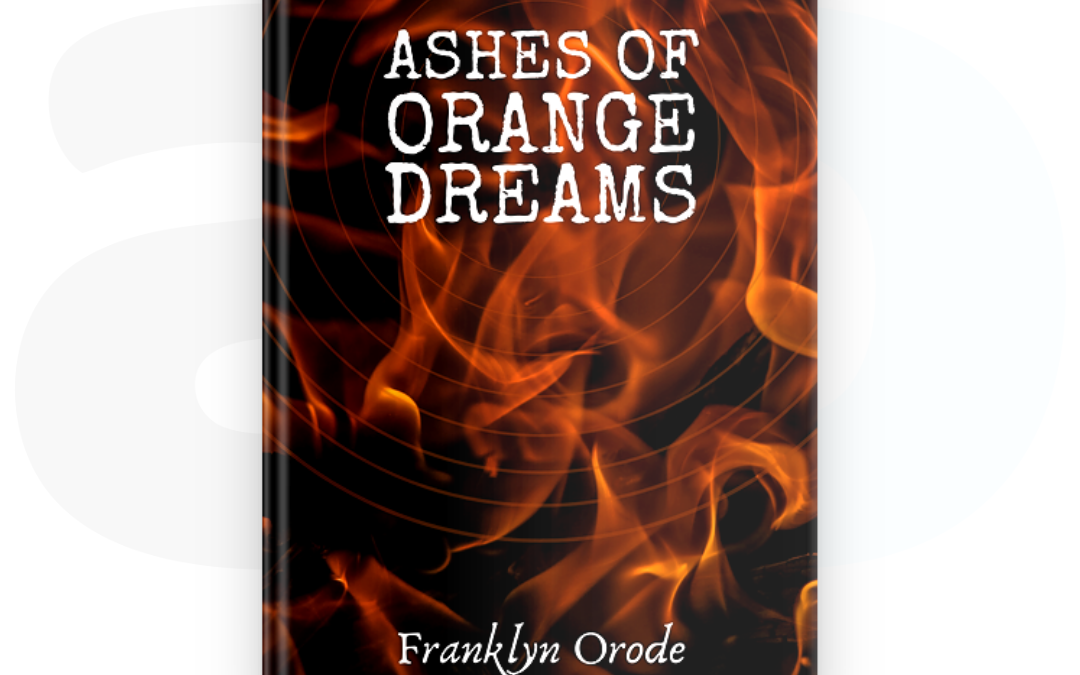 Franklyn Orode’s ASHES OF ORANGE DREAMS confirms that (great) poems are the treasured oyster shells we pick by the shores of a poet’s mind after it has overflowed its banks. My first contact with Franklyn’s poetry was memorable and I was immediately won over with his soft imageries which seemed to gently purr at the reader like a cute little puppy. So, I entered this chapbook with a high expectation and it is worthy of note that the poet did not disappoint.

ASHES OF ORANGE DREAMS, is a 34-page book of 17 carefully selected, multi-themed poems which are lovely to read. Franklyn examines themes such as love, grief, nature, heartbreak, suicide, nostalgia, death, dreams, and core social issues in Nigeria. All the poems contained in this collection are written from a place of sincere concern about injustice and a longing for a world that is fairer, hence the dedication of the book to the victims of the Aluu Four Lynching who, in the words of the author, “…left their mother’s arms, but returned home in ashes.”

The opening poem, A PORTRAIT OF ME, ’97, for instance, is a slide show of warm memories and animated dreams. Franklyn writes about his wish to go back ”to that land of sleeping troubles, where happiness is ever young.” In a world pulsating with chaos and ebbing with wild waves, everyone longs to have peace and tranquility. This is what the poet aptly captures in the opening poem. And for me, there are fewer ways that are more brilliant than this, with which Franklyn Orode chooses to welcome his reader into this book of poems.

Howbeit, just as the title of the chapbook suggests, in many of the poems, hope is seen miming dangerously to the edge of life. There are two poems which perfectly mirror this. The first is, SLEEPING DREAMS, in which the poet writes; “O my dying dreams, please don’t you die||Do not make my immaculate tomorrow a widow.” The lines are sharpened by the employment of strong personification to cower hope back to the dancefloor where dreams are waiting and proposing a couple’s dance. The second poem is, SOLITUDE, the poet writes: “How would a poet find rhymes to quench his burning bones? ||When somehow the cocks crow with his demons still awake” The rhetoric is thought-provoking and beautiful.

Impressively, aside from the use of personification, the poet employs other literary devices such as rhymes, metaphors, and oxymoron. For instance, in WILTED ROSE, the poem is littered with oxymorons. It reads: “Last night I cried you a gallon of tears||In the company of your impending absence||While resting on this tender bed of prickles” The rich yet relatable diction draws a person in with an irresistibly magnetic power, which is worthy of commendation.

Also, Franklyn Orode’s craft mirrors a poet who is socially conscious and hopes to use his poetry as a tool for social change. In AL MAJIRI, he laments about the fate of a street kid whose only memory of his roots is the begging bowl handed to him by whoever. He sends a strong message to the political class in TOMORROW NEVER COMES “…Tributaries of promises flow through the edges of their mouth||To invigorate jaded spirits.” Then, with such an admirable ease, Franklyn proceeds to prove to us that poetry can be an envelope in which open letters about personal grievances can be communicated to the world. He does this in the poem, THE ENGINEER’S INVOCATION:  “The practice catches cold from bad weather||… Give me a drawing board… Let me draw the lines of my vexations in isometrics||Poetry is pure physics and I can prove it||From these dead equations floating In my head, hanging by a thin thread||Of pain, coloured red from frustrations”

No doubt, poetry lovers around the world can attest to the fact that many a poet almost always offer some free and mostly ‘unsolicited’ love advice to their readers. Franklyn Orode makes no exception of this. In ASHES OF ORANGE DREAMS, he touches several aspects of love. In the poem, LOVE AND MEMORIES, he captures the footprints of love, and takes a sharp x-ray of absence thus; “Tonight my head swirls anew||It rests its weight on your absent shoulders||From germinating seeds of your memories||That has become ripe with thorns and thistles.” In another poem, he shares his own secret to staying in love, in the poem, METAMORPHOSIS; “I’ll study every book from your complicated library||I’ll study your antics like a college course compulsory||In each passing moment…||Till our beautiful imperfections entwine at the summit of glory”

After immersing myself in the poesy of this rather brilliant poet, I have to say that a great book of poems is like a pool, no one enters into one and comes out the same. So, don’t be surprised if every poem in this lovely chapbook touches you in different places. You will be wooed by the splendorous flexibility of good poetry and you will fall so deeply in love.

Get your own copy here or fill out our contact form if you would like for us to review your own book.

Writing is a lonely and mentally exhausting activity. From sourcing writing ideas, to the actual scribbling, all the way to seasoning it for your audience, the process is anything but exciting.Do you have to do all of these alone? At Eboquills, we are happy to help you edit your manuscript, ghostwrite your book, write a blurb for your book, and support you through the journey of becoming an author.Get in touch today for personalized writing support.Happy new week from all of us at Eboquills!#Editing #ghostwriter #betareader #eboquills #writing ... See MoreSee Less