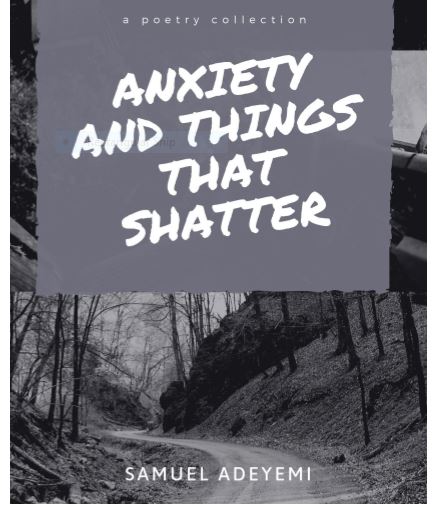 I had barely read halfway through the first part of this three-sectioned anthology before I messaged Samuel, “How did you put these poems out without feeling naked?” The poems in this collection pierce deeply. They are exudates of a troubled mind. The poems, like people running out of a burning house, did not bother with clothing. Each word is in its birthday suit and as a nudist, it walked the busy streets of my mind without any shame.

Anxiety And Things That Shatter is a slide preparation of a cross-section of anxiety placed under the eyes of a microscope- it would spare you no detail! It would show you all the components of anxiety, the ones you know and the ones you have never tried to christen for fear that they might live longer with you. You will, like I did while I read, pause in between the lines and wipe your eyes, then look up to see if anyone was watching how these words melted you.

Howbeit, Samuel lays out all the elements of anxiety. He talks about pain and many strains of hurt. He wears the shoes of broken boys, walks a mile in the empathy lane, as seen in his poem, “To the Boy Who Sat Beside My Gate”

“Let him know I wrote a poem about him.

Explain to him that I am a coward

Who hides behind a pen and awkward verses

And tell him my words are nothing but weak corpses

And they can only lie on my tongue, like an autopsy table-

Unable to make a difference…”

This gives an insight into how poets adopt other people’s pain without going through the adoption process which requires adoption papers. The poet calls our attention to the hurt we feel when we cannot put a poem into a beggar’s bowl, yet that’s all we have.

Although it is difficult for me to do a review of this rather powerful book because it’s like okoho soup, you want to serve your guest some of it but the whole slimy soup is out of the pot, with just one singular scoop. For days, I have hoped to do a perfect review of this book. To not say too little or say too much, but “I have buried this burden called hope” as Samuel wrote in his poem “Seraph”, and I weave my thoughts nonetheless.

I have to write my way to the place “Where the tip of my tongue isn’t stapled, to the corner of my mouth by unfaltering fear.” (Utopia). “But some days you feel the blood pulsating in every vein, and the thoughts scrambling for attention. Other days everything is static; the pen is eager but the ink, weary, and there are no words to breathe” (Static).

Samuel, in his poem, “Days,” talks about those who hold everything but happiness

Days when being sad is my only option

because happiness is my father’s oversized kaftan

I will have to grow into, and I am scared when that time eventually comes,

These ones who sit before a therapist and hide some wounds because “Pain is a drug for relevance” (“Healing”) and return home wishing to be the man they see when they stare into the mirror.

In conclusion, Samuel is meticulous in his style. He leaves out no details. His work is a manual for you who has an emotionally unstable and highly anxious friend, someone who according to the author is drowning in himself. Allow Samuel to take your mind on a tour through your friend’s world!

WHAT IT MEANS TO BE A WRITER IN MY COUNTRY

Need an Editor? We’re Here For You!

A Review of Eriata Oribhabor’s Mek We Yan