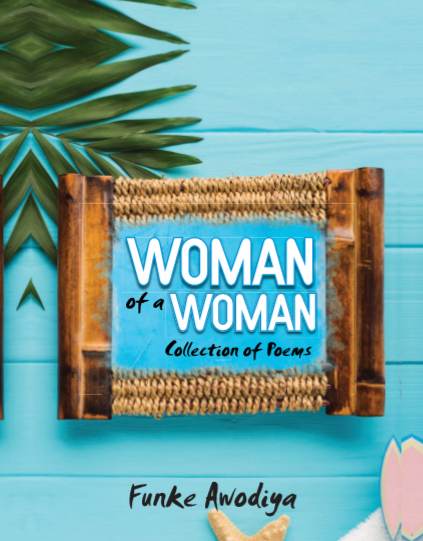 Published by: Something for Everybody Ventures (SFEV)

Funke Awodiya’s anthology of poems, Woman of Woman, is a diary of tributes to great women and unsung heroines like Dora Akumyili  (Tribute to a First Daughter); Bukky Ajayi (Maami);  Dr. Stella Adadevoh (Here We Are); Maryam Babangida (To the Memories of a Trailblazer) and for all Nigerian women (Queens of the Niger Area).

I went at this collection, one poem at a time because I needed time to pause and absorb the powerful messages carefully wrapped in lines and verses by this fine-fingered poet.

The opening poem “Stand Up!” drew me in just as the coolness of a river seduces tired farmers after a long day under the fury of the sun. The message is all-so strong, and sweet like fresh palm wine, my mouth continued to beg for another sip until the last drop fell from the keg. Funke Awodiya uses simple language to talk about the (r)evolution of the womenfolk, urging more women to enlist

“…hearts that raised us,

to be the pinky blueish girls we were,

brown sugar women we are …

for women we are

girls we used to be

bitches they made of us

“witches” we will become

let no rapist rape our tomorrow,

or stone our age.”

This right here is one of the most simplified gospel of women empowerment, girl-power and if I may add, feminism; the most misunderstood word and movement in our society, which she did not close without writing about in her poem Land of ignorance:

making them think penises are chalks

and breasts are dusters,

She leaves out no isotope of womanhood in this collection. Every slice of reality, women live with is captured so aptly. In Woman of Woman, there is something for:

“You’re a widow not a window of pity,

Throw not a party,

If empathy finds you

Open your arms and embrace it”

and message of submission to death

still flies from the pulpit

to the head that kills its body in words and blows

telling her to be fate-full till death hurls her

and her faith to the grave,

Elegy to the Little Bride

Under the shade of dongoyaro tree she sits

the orchestra of a childhood cuts short

who will hear this sober tale of a little bride?

in no time a girl becomes a mother of another girl,

In poems such as Sitting-Tall Queen and pink ladies

–Who can beat mothers’ love?

“If not a mother, who wears her children

to strap every child’s dream to her bosoms“

–Every day is Mother’s day

It is magical to be reminded of who you are. Sometimes, that reminder calls one’s attention to the vast deposit of talents and abilities which have been lying fallow. Funke knows this and applies it very commendably in the following poems:

Woman  of a woman

your gait is a reminder of standing trees

in a forest of fallen trees

We are descendants of warriors,

for their unborn daughters

But she has an army in her

… of tears sweetened with cubes of joy

In yet another, The sun will shine again, she wrote: hope is the silage and hay for the days of drought.

The word-economy, simplicity of style, and relatable diction are very major ingredients in this collection especially because all those three are becoming extinct in contemporary poetry.

Woman of Woman is a book for everyone; girls journeying to womanhood, men who dream to be fathers to these girls, and all women, who the author reminds to be supportive to one another in poems like Prayer for a sister, Dear Sister Omolola, and

Don’t leave me behind

Because I slowly walk

Allow me move at my pace

Jealousy is a stranger where love reigns

Funke Awodiya’s Woman of Woman is a strong poetic statement that I like to compress into one sentence: a woman is not a finless fish, which must live only at the mercy of societal waves and tides.

how come your hair smells so nice? -Poetry

Writing Contests to Enter this June We made a list of writing prizes and contests you can enter this June. Guess what? These prizes are mostly free to enter so all you have to do is just write and beat the deadlines.eboquills.com/2021/06/10/writing-contests-to-enter-this-june/ ... See MoreSee Less
View on Facebook
· Share