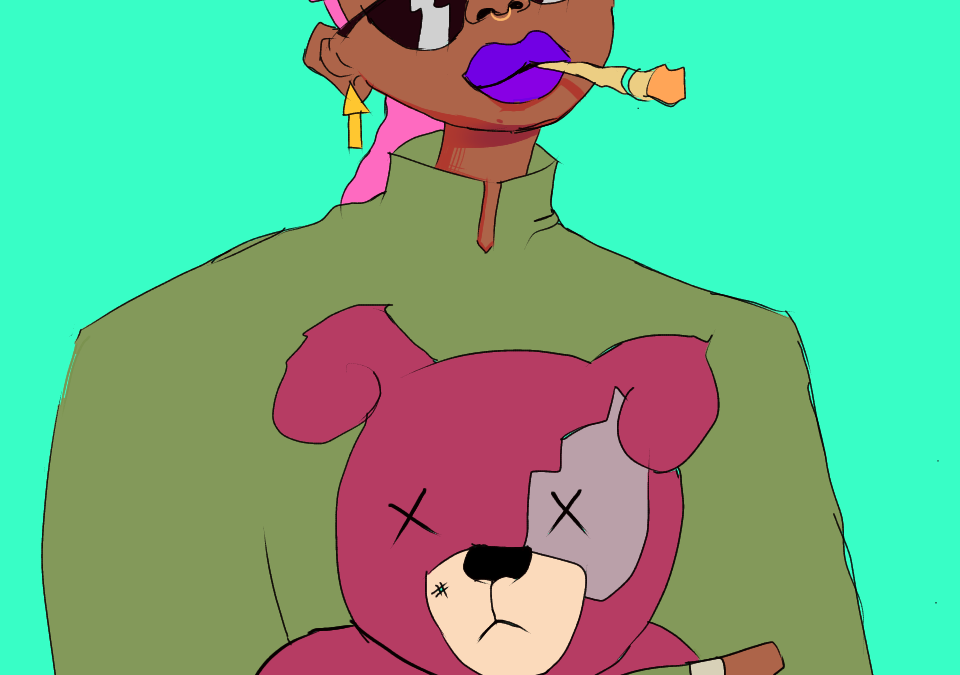 There was a big teddy bear sitting on a cupboard in the small room. That was the first thing I saw. It was white or maybe pink—it was hard to tell with the room lit up by the glow of a dizzying red bulb.

The second thing I noticed, I think, was the compactness of the room. It was split by thin cardboards and a curtain covering the side the board couldn’t reach—so you could hear the constant smacking noises and moans, and groans coming from the other side of the room. So basically it was one room split in two, with the other half being occupied now by the both of us.

She was little, this girl; I mean slender and small, the type you could lift up in your arms or smother with a warm cuddle. That was why I walked past the other ones, big-breasted and fat, and thick and meaty, and stopped by the door of her room where she sat outside, not standing like the rest, the shiny stud on her left nostril gleaming.

She looked nervous, the way her long lashes batted when she came close and stood in front of me, looking up. I touched her cheeks and smiled. I was also nervous, but hers gave me boldness.

I slid my hand down her small waist and let my fingers intertwine with the beads around.

“I like this,” I said. I truly did; it was another reason I walked past the others and came to her, even though I later realized the waist beads were pretty common among the ladies there.

She batted her eyes again, those lashes waving, and smiled.

“Thank you,” a soft voice whispered. She tickled my chest with the tip of her fingers, and my body responded. Then I heard the soft gasp escape her lips when she moved her hand down and clasped the guy down there. I smiled. Yes, my ego inflated a bit.
Her eyes shone with nervous excitement as she caressed it and then, guiding me backwards—which was just a few steps, really—to reach for the shiny foils stacked on a small table. She’s in a hurry, I thought. Of course she is; she’s at her work. But how was I supposed to tell her I walked through that dark road, followed the red lights, walked past those women with their exposed bodies, and came to her simply because I needed company?

I don’t know her, after all.

She continued doing her thing, one hand grasping and stroking and the other hand fiddling with the square wrapping of the condom. She hadn’t even asked for money. But she did that as soon as she was done nestling the latex around my now fully aroused member.

Voices rose on the other side of the room, the place obscured by the curtain. A quick haggling—a woman’s voice, rough from smoking so many cigarettes, and a man’s voice, deep and teasing—then the squeaking and the grunts followed.

“Come,” the girl beckoned to me. I wanted to ask her name, but that would be weird, I told myself. So I followed her, just a step or two and we were on the bed. She was magical, that girl; the way she moved and guided me; the way she moaned and gasped, and clung to me—I told you she had a small body—and finally, just as I grunted deep and tipped over the edge, thrusting deep into her, she relaxed and sighed with me.

I also wanted to ask if she came too, but that would be stupid, right?

I rolled off to the side panting, careful not to crush her with my weight. Then I felt her hands as she carefully used a wad of tissue paper to clean off the mess from my still throbbing, erect member.

She may have sensed I wasn’t ready to go, for she climbed back onto the bed after tossing the used stuff away, and lay her head on my chest, and snuggled up close. I closed my eyes and tried to tune out the sounds coming from the other side, and listen to just her soft breathing.

We lay in silence for a few minutes until I opened my eyes, my hands all the while fiddling with her waist beads, and spoke.

She glanced up, surprised.

Oh shit, am I not supposed to ask her name? I wondered.
But I noticed it was just a searching gaze in her eyes; a look to check if I meant it. If I truly wanted to know her name.
She smiled, nodded, and told me.

“Sarah,” I repeated, tempted to say ‘what a pretty name’, but I didn’t think it was ‘that’ pretty, so I stroke her waist and she giggled and snuggled closer.

“You smoke?” she asked and reached for a pack of cigarettes.
“No. But I’ll try one.”

We were both naked, but it felt natural. And we were speaking in whispers. By now the woman on the other side was entertaining a third male voice. A hot cake, I thought. Men do like those busty women, after all.

Again, I think she read my thought. As she offered me a cigarette—helping me light it with hers—she said in a low voice, “that woman get many customers. Every night. One by one, they just come and come.”

I almost chuckled. Come and come, ha! but she didn’t have a smile on her face. So I held the burning cigarette in between my fingers, not sure how to start, and held her close.
“I’m sure people like you too.”

She laughed, more with derision than anything
“It doesn’t matter. Work comes. You came.”

I saw her face clearly now. Small and round, cute lips and dimples when she smiled. Her hair was made into tight locs, and her skin was dark. The thing is, and I don’t mind, her chest is sort of flat and she barely has any hips. She’s as slim as they come. My taste, really; but yeah, I understand that laughter now.

Still, she was beautiful. And wait, does she think of me as just work?

Her face was clouded by smoke now, her lips parted slowly so that small clouds of smoke puffed out. I stared at the cigarette between my fingers and wondered how the hell I was supposed to do it, then she laughed and said, “just smoke”.

I sucked in the smoke and swallowed half of it and coughed, and she giggled, rubbed my chest and I smiled.

That felt nothing. At least not at that moment. My tongue just felt numb and my nostrils itched, still I smoked with her and occasionally dropped hot ash on my thighs and gasped and smiled when she helped me clear it off, her fingers soft as she brushed it off carefully.

“Your mind, you let it walk too much,” I heard her say and watched her move closer, the bed creaking. She pressed the two mounds on her chest against mine, the warmth soothing, and held my chin. There was understanding in her eyes.

“Relax,” she whispered and pressed her head to my chest, against the rapid beating of my heavy heart. It worked, whatever she did. I exhaled slowly and my heartbeat slowed to an even thump.

We stayed that way for a few more minutes, then she suggested we have sex again and we did. It was longer, more intense and noisier—rapid creaking, grunts and moans and the likes—then she told me she had to get back to work now.

After I got dressed my eyes went to the teddy again and I told her it was nice.

Daddy bear, that’s what she called it.

She didn’t ask for my name, I thought somberly as I got dressed then I scolded myself: she’s just a prostitute. But that stung, too; I didn’t think of her as ‘just a prostitute’. I fumbled with the lock on her door, squinting hard to see it. Then she brushed her hand against mine and helped me, and as soon as the door open and the cold air from outside hit me, she came closer to me, stood on her toes, and pressed her lips against mine.

“Will I see you again?” her voice was a whisper.

“Yes,” I answered without thinking. “Tomorrow.”

Chuks Obinna is a writer and lover of words. A former engineering student, he’s decided to go full-time with the whole writing thing. He loves bizarre stories, video games, nerdy things and being happy.

Just Got a Rejection Mail? Here's How to Handle it

Six Writers Share Snippets of their Lovelife with Eboquills